On meetups, community and principles 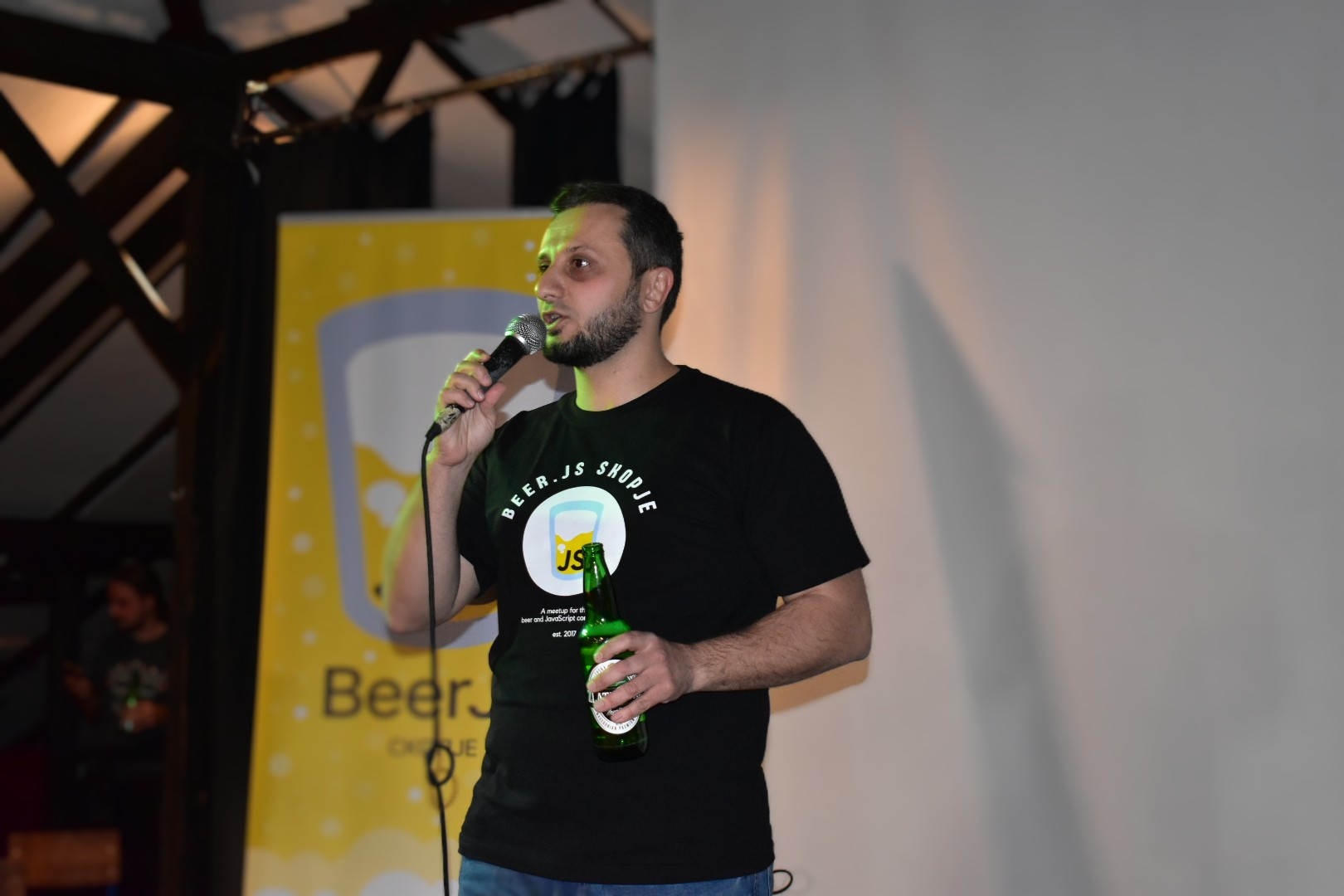 Sure sucks that we don’t have more meetups around here…

… was a sentence that I found myself saying repeatedly - to friends, colleagues and pretty much anyone that had to do with web development before 2017. I took every opportunity I could to travel abroad and go to meetups and conferences to scratch that itch. The woes of living in a small country and all that. Even though my country’s IT industry was getting bigger by the day, there weren’t many community events, conferences etc. I’m not counting the thinly-veiled PR events here at all - we’ve had and have plenty of those. Nothing wrong with them, but it feels dishonest to consider those “community” in any sense of the word.

I’m not somebody that likes to complain, especially if I can do something about what I’m complaining about. Catching myself being grumpy about not having more meetups and an actual community, I realized that there are three possible outcomes of said frustration:

Around March 2017, I stumbled upon BeerJS. Being already half-determined to start something myself, I chose to interpret that as a sign to Just Do It™. I opened an issue and got access to the new repo for Skopje under the BeerJS org. Then it hit me - I have no f**king idea how to organize a meetup! Where do I start? How do I get people to come? How do I find speakers? 😬

… with a little help from my friend(s) …

For better or worse, most of the people that I consider close, are in the industry. That certainly made things easier - at least, I’d get somebody to attend. Plus, free beer sure helps, and one of the companies I collaborated with at the time was more than happy to donate the beer. Which leaves speakers - it wouldn’t make much sense to have an event without someone that does the speaking part, no?

Luckily, I was already working with someone that gave a React talk a while back. So, he agreed to be one of the speakers, but I was stuck with the idea that one presentation wouldn’t be enough. Happily enough, a friend asked one of their friends who also happens to be a developer to prepare something for the first ever BeerJS in Skopje. He also said yes! So - beer/sponsorship done, audience sort-of done, speakers done… ah f**k, I need a venue to have this thing in. At that time, I spent my working days in a co-working space. I casually mentioned that we were trying to find a place for the event to the owner of the co-working space (shout-out to Daniela and Coffice), and she said she’d be happy to host it. On a whim, I picked the 17th of May (2017) as the date to have the event and we were off to the races.

Meanwhile, I bought a domain and made a website for the event - https://beerjs.mk. Since I’m not big on social media, again I asked a couple of friends to make some profiles for me. With that, the group behind BeerJS Skopje informally started taking shape.

Lesson 1: Ask for help when it feels like it’s overwhelming. Events and meetups are a team sport.

The event went pretty well, for a first try. We even recorded the presentations and published them on our YouTube channel - even though we had a bunch of technical issues with sound, choppy video etc. Before the event started, however, I realized that it would be a good idea for the event to have an “opening” speech of sorts. Plus, somebody had to announce the speakers. I didn’t particularly enjoy the idea of taking the spotlight myself, but nobody else wanted to do it and the idea to have this meetup was ultimately mine. So, the responsibility was mine and I did all of that quite clumsily (beer helped though 😅).

Lesson 2: Things will go wrong. No amount of planning will guarantee that everything works as planned. Learn and move along. Embrace the chaos, because it will get chaotic.

Initially, we had the grand (and very misguided) ambition of having one meetup a month. Realizing that finding speakers wasn’t an easy task, we’ve got to the conclusion that two a year is probably more realistic. I imagine this doesn’t apply exactly to larger countries, but in our corner of the planet, we’re running the risk of having the same 5-6 people in rotation which could get pretty boring pretty fast. The situation has improved somewhat since, but our speaker pool is still pretty small.

Luckily, we got a bit of a reputation for being “independent” and “kinda punk”. That seems to have helped attract the kind of people I was hoping to: developers that like to experiment, open-source contributors and developers with interesting stuff to say. Up until our 4th meetup, I bothered pretty much everybody I know and meet that’s in the industry to either give a speech or point me to somebody that would be into giving speeches about anything tangentially related to JS. It was at BeerJS Vol. 5 that people started approaching themselves to give speeches; It was via a company, but I made sure to make it clear that speaking slots weren’t for sale (more on that a bit later).

Reputation is one thing but, to give things a more practical tone; On the other side of event planning, we have a bunch of not-so-fun things that someone has to take care of, for each event (and incidentally, also Lesson 3, in the form of a checklist):

On sponsorship and sticking to the spirit of the event

The meta repo for BeerJS clearly states the following, under the Rules on Donations examples:

The Tahoe branch met at a cowork location for free and a local micro brewery would donate beer every month to support our efforts. None of those groups ever asked for something in return. They were > supporters of building commmunity.

A company has agreed to provide beer if it has access to the email addresses for the members of your community. A recruiter has offered to buy pizza if you let them use a meetup as a recruitment platform.

I consider myself a very principled person (bordering on stubborn, most would say) and I believe that quality has helped me keep the event in the “community” spirit and avoid commercializing it. Once people saw we could get a fair amount of people to an event (current record at 140+), we began getting some fairly unsavory offers ranging from product placements, to a certain amount of banners visible, being mentioned an X amount of times on stage and so on. Those things could be easily categorized as commercial and none of us in the Skopje branch are looking to get paid from this. We think of it as a “by-the-community, for-the-community” event, and we plan on keeping it that way.

Now, there are certainly gray areas with which I’ve had some trouble personally, but I’ve grown to accept them as a necessity. A good example would be the fact that often, companies approach our event with a sponsorship + speaker deal. In principle, I’m opposed to that. But, speakers aren’t easy to find. I compromise by going out of my way to explain that being a sponsor and providing a speaker are two distinct things, and speaking slots are not for sale. The presentations still have to be non-commercial, however. We don’t allow anyone on stage to give a product promo, sponsorship or not.

Lesson 4: Being principled about the spirit of the event is great and all, but some things aren’t as black and white as some of us would like. Compromise, but not on what the event is.

On giving a speech at your event

I did a few internal (company) presentations during my career and I realized I don’t hate doing presentations 😅. But for me, giving a presentation at an event that I am involved with organizing feels a bit… dirty.

Still, at BeerJS Vol. 3, I pretty much had my hand twisted into giving one. We had a really hard time finding anyone willing to give a speech and I was already in the process of preparing one for a project I was working on. As the event date got closer and closer, we realized we didn’t have much choice. To this day, I don’t feel too comfortable doing that, but it had to be done. At least I had someone else from our branch to the opening, closing and speaker announcements. Plus, I gave a full disclosure at the start of the presentation, for the benefit of having a clear conscience, if nothing else. In a nutshell, Lesson 2.

This brings me to our last, post-pandemic edition of the event. We took some time off from having the event, obviously not by choice. To me, our BeerJS wouldn’t be a good fit for making it an online event. It feels like making it online isn’t in the spirit of what the event should be about, so we chose to take a break instead.

Much like with Vol. 5, a company approached us with the speaker + sponsorship deal, in early 2022, when things seemed like they would settle down and the restrictions about having events would lighten up. I invited the other speaker myself, we booked the event and the rest was “business as usual”. We were used to it by now, it feels like. Thankfully, we got a bit more support for social media promo from a bunch of other organizations and companies, and it seemed like we would at least have a decent turn-out. What we didn’t expect was filling the entire venue to the point of it not being comfortable to have more people in there. I stopped counting at 140 😅. We tried to be as careful as possible, having a pandemic and all, but people will be people and you can only do so much. Still, in my opinion, we had the best meetup so far and it seems like interest in the event keeps on growing. We’re probably doing something right 😁.

Fact is, we’re probably still around because we like doing this. You’ll have to find your own motivator, but being persistent no matter how frustrating it gets (and frustrating it does get), to me, is key to having a meetup that is considered to be successful. So, just try having fun and if you need any kind of motivation to start your own meetup (BeerJS or otherwise), consider this post a sign to Just Do It™. If you need any sort of advice or support we can provide, feel free to contact me at hello@darko.io or our BeerJS branch at hello@beerjs.mk.

I’m probably the worst person to advise on how to promote anything on social media, but I can list the things that we’re doing and seem to be working:

Lesson 1: Ask for help when it feels like it’s overwhelming. Events and meetups are a team sport.

Lesson 2: Things will go wrong. No amount of planning will guarantee that everything works as planned. Learn and move along. Embrace the chaos, because it will get chaotic.

Lesson 3: Have a checklist:

Lesson 4: Being principled about the spirit of the event is great and all, but some things aren’t as black and white as some of us would like. Compromise, but not on what the event is.